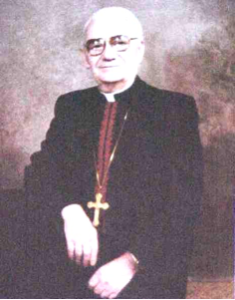 Father Mitrat Basil was born on April 17, 1922 in Yamnycja, Region of lvano-Frankivsk, Ukraine. He pursued theological studies in Lviv, Ukraine, Vienna, Austria and Hurschberg, West Germany before immigrating to the United States of America. Father Mitrat Basil was ordained on September 17, 1961 in Edmonton, Alberta. Following a year of pastoral work in Calgary, Alberta he came to Prince George as pastor of St. George’s Ukrainian Catholic Church on September 1, 1962.

For over forty years he has energetically dedicated his life to the service of our Lord and the Ukrainian Catholic faith, to the religious upbringing and spiritual renewal of the faithful, to the education of the youth of the parish in catechism and in the Ukrainian language and to the cultural life of the youth and the community through a dance troupe and a church choir. Father Mitrat Basil’s love for the people of his parish and community of Prince George was demonstrated by his devotion and selfless assistance to the sick, the needy, the homeless and the unemployed of all nationalities.