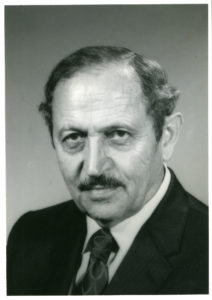 Dr. Dziubanowsky was a well-respected member of the Ukrainian community in Windsor and he and his wife Olha were long-time parishioners of Sts Vladimir and Olga Church. Born in the Ternopil region of Ukraine on September 9, 1904, Dr Dziubanowsky received his medical training in Poland and practiced medicine briefly in Ukraine before serving as a medic in the Ukrainian National Army, 1st Division.

After the war, Dr. Dziubanowsky immigrated to Canada where he received his Canadian medical certification. He was in private practice in Windsor from 1951 until his retirement in 1984. Dr. Dziubanowsky, who passed away on December 22, 2003, was predeceased by his beloved wife and their daughter, Marta.

Dr. Dziubanowsky left a substantial gift to UCEF in his will. He understood the mission of the Foundation, as well as the importance of education for the continued growth of the Ukrainian Catholic Church. For that reason, UCEF honoured the wishes of one of its dearly departed benefactors with the establishement of an Endowed Chair in his name to support UCU.