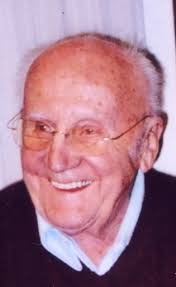 Bohdan Bulchak was born in Belz, Galicia, Western Ukraine, on August 2, 1917 and fell asleep in the Lord on July 2, 2013, late of Toronto, Ontario, Canada.  As a student, he studied at the Lviv Polytechnic, where he took veterinary courses. Later, he attended the University of Innsbruck, Tyrol, Austria, Faculty of Pharmacy until the outbreak of WWII.
Bohdan with his family came to Canada on March 21, 1948, after being liberated by Allied forces while in Germany. Bohdan and his family landed at Sydney, Nova Scotia, aboard the Greek ocean liner, New Hellas.

The Bulchak family moved on to Toronto, Ontario in 1949. On February 26, 1976 he married Alexandra Hoshovska.

Bohdan and his brothers soon started a woodworking business and, eventually, Bohdan began working for MC (Maslo-Soyuz) Dairy. At this time he started taking courses in dairy and milk by-product production at the University of Guelph. In time, along with his business partner, Bohdan purchased shares in the company and acquired ownership of MC Dairy in 1959. Bohdan worked very hard to make MC Dairy a household name, especially within the Ukrainian community of Toronto and area, and he was involved in his church (UCC of the Holy Protection) and organized Ukrainian community life as much as his work would allow. During the 1980s Bohdan retired and sold MC Dairy.